It happens to all of us

Poorly (machine-) translated menus are an endless source of amusement.

It happens to all of us. At least, to those of us who happen to spend our days translating or interpreting for a living. Call it déformation professionnelle. Or occupational hazard. Or language geekery. Or maybe it’s just me. You take a seat in a restaurant and start to peruse the menu. You scan every page, not necessarily because you want to actually order every dish, but because you want to know how they say this or that fish or meat or that weird-looking – animal, vegetable, mineral…? – in English, or French, or German. Or simply because you fancy a good laugh, because you know that restaurants would never pay for the services of a professional translator when they can get their menus translated at no cost online. Poorly (machine-) translated menus are an endless source of amusement; why order Canarian-style papas arrugadas when you can order a plate of “wrinkly popes” instead. Just type “menu translation fails” into your online search engine and you’ll see what I mean.

Well, I finally got the chance to put my own culinary knowledge to the test when I was asked to interpret a series of cooking master classes given by Michelin-starred female chefs. I of course jumped at the opportunity to talk about food for a day, sample a top-notch tasting menu, and get paid for it. Sounds, quite literally, like a piece of cake. But then, as they say, the proof of the pudding is in the eating. And like any other assignment, preparation is essential if you want to be able to deliver a palatable product, to send your customer home well-fed and content rather than staggering home under the weight of mental indigestion after having their brain stuffed with stodgy and overcooked explanations of complicated recipes.

How to prepare? There are plenty of ready-made resources to draw on. Dig out your cookbooks and read through a few recipes. Watch any of the smorgasbord of cookery programmes that seem to have sprung up in recent years, and find out how celebrity chefs talk about what they are doing. Then, before the event itself, try to get your hands on a copy of the tasting menu to find out what the chefs are going to be conjuring up (a word of warning: do not rely on machine translation).

What emulsifying agents do they use? What’s foodpairing all about? And what on earth is spherification?

We all know our way around a kitchen, but the humble fare we prepare in our own homes is nothing like the sort of artistic creations you will be served in a top restaurant. Not that I’m knocking home cooking; nothing beats the simple pleasures of eating food lovingly prepared in your own home. But it’s not every day that we eat in Michelin-starred restaurants, let alone spend time in their kitchens learning the tricks of the trade. Fine dining, and its celebrity chef exponents, has raised the status of modern cuisine to both entertainment and art form. To a science, even. Some chefs are no longer simple cooks, but scientists who dabble in molecular gastronomy. So make sure you find out about the tools, techniques and ingredients of modern cuisine. How do they make those foams? What emulsifying agents do they use? What’s foodpairing all about? And what on earth is spherification?

And then, the event itself. Unusually, I wasn’t working in a booth, but with the Infoport system, at the back of the room. In this case it actually made a lot of sense, because you could literally smell the food as it was prepared in front of you and beamed across the room in high definition on large television screens.

But once the chef started passing choice morsels around the audience, the torture began. For obvious reasons, it is impossible to talk and eat at the same time, which meant that I had to pass every time I was offered some exotic and (probably) delicious sliver of haute cuisine, and fight to quell my rumbling stomach, hoping that the sensitive microphone wouldn’t pick it up.

Although I had to interpret (consecutively) between courses, I managed to find the time to enjoy and even finish every dish that was served up.

Fortunately for me, I had to accompany the invited foodie journalists to the dinner that evening, where we all sat down to sample the seven-course tasting menu in its entirety. And although I had to interpret (consecutively) between courses, I managed to find the time to enjoy and even finish every dish that was served up.

So when interpreting a chef, what are the potential pitfalls you might encounter? Well, at the risk of stating the obvious, I think you have to be prepared for anything. Many chefs nowadays see themselves as artists. When they start to describe their food, they can often go off into flights of fancy; or they may sometimes be much more prosaic. This all depends, of course, on the chef. Cooking, by its very nature, is highly descriptive. Pick up a cookery book by Rick Stein or Yotam Ottolenghi and embark on a narrative journey through the flavours and aromas of the world.

It also helps to find out where the chef comes from. Cooking techniques differ from one country to another, or from one region, or even town, to another. And be prepared for the unexpected. I didn’t expect to have to describe, in gory detail, how a pig’s head was deboned, pressed, and then sliced into thin strips. It also caught my English-speaking clients in the audience unawares, some of whom started to look distinctly green around the gills; although when it came to eating it that evening, none of them even batted an eyelid.

And finally, you need to be prepared for regionalisms. I spent another night interpreting a Galician chef. But that’s another story entirely… 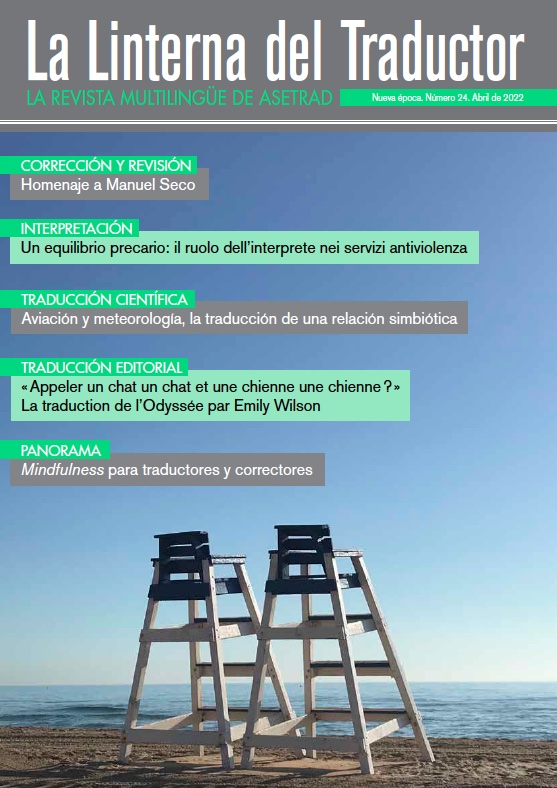 An interview with Maya Hess, founder and CEO of Red T

This website uses cookies to improve your experience while you navigate through the website. Out of these, the cookies that are categorized as necessary are stored on your browser as they are essential for the working of basic functionalities of the website. We also use third-party cookies that help us analyze and understand how you use this website. These cookies will be stored in your browser only with your consent. You also have the option to opt-out of these cookies. But opting out of some of these cookies may affect your browsing experience.
Necessary Siempre activado

Performance cookies are used to understand and analyze the key performance indexes of the website which helps in delivering a better user experience for the visitors.

Analytical cookies are used to understand how visitors interact with the website. These cookies help provide information on metrics the number of visitors, bounce rate, traffic source, etc.

Advertisement cookies are used to provide visitors with relevant ads and marketing campaigns. These cookies track visitors across websites and collect information to provide customized ads.

Other uncategorized cookies are those that are being analyzed and have not been classified into a category as yet.